Army fans and alumni might not like it, but yes: This year’s Army-Navy Game should be played at Navy-Marine Corps Memorial Stadium in Annapolis.

Who, wait a minute? Who said this was a good idea?

Let me explain. Army fans might still object when I’m done, but for any neutral parties, this idea is going to sound very sensible after you read the next few paragraphs.

Let’s start with the simple reality that the Army-Navy Game as we have known it is not going to exist this year. The game might be played, but not in the typical circumstances we are familiar with.

There won’t be a Long Gray Line of cadets or the brigade of Midshipmen, marching into Lincoln Financial Field in Philadelphia in tight blocks of bodies. Coronavirus is going to make that not-very-socially-distanced portion of pregame pageantry an impossibility. It’s just not going to happen this year. A full-capacity stadium in Philadelphia is not something we should try to bring about — not unless a vaccine exists. It’s not worth the risk.

So, if you’re not going to have the normal Army-Navy Game pageantry in a big stadium before CBS cameras, it naturally makes sense to move the game to a smaller stadium. Why not take advantage of a more intimate setting and put the Army-Navy Game there, as a twist? Give the game some local charm. That’s merely the start of the argument for why the game should be in Annapolis this year.

The other especially important argument for moving the game to a smaller stadium is that the last time Army-Navy was played on campus, our nation was in the middle of World War II.

Should the 2020 Army-Navy Game be played in Annapolis? Sound off in the AcademyWars.com forums.

The last Army-Navy Game played on campus was in 1943. Michie Stadium in West Point hosted the game. Annapolis hosted the year before in 1942. You have heard it said that this pandemic requires a “wartime footing” or “wartime posture” from the country. If you accept that general notion, the history of this game suggests that moving it on campus is appropriate for the current situation. Why play a game in a big urban area with a massive stadium when fans won’t be able to attend in large numbers? 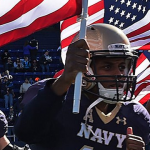 The added arguments to make for Annapolis compared to West Point:

A) Navy plays in a conference. Accordingly, the Midshipmen might have to play the AAC Championship Game the week before Army plays. Army doesn’t play in a conference. If one team should have to take on the burden of traveling to the other team’s site, it’s Army. That should be the tradeoff for playing (or not playing) in a conference.

B ) Argument A is more important than this one, but: Navy Marine-Corps Memorial Stadium has never hosted the Army-Navy Game. Michie Stadium has hosted it once. If any of the other arguments mentioned above don’t convince you enough, think of this as a tiebreaker… and if, in 2021, we still need to socially distance at college football games (we hope we won’t have to, but let’s say we do), then Army can host Navy at Michie Stadium.

Play the 2020 Army-Navy Game in Annapolis. Is it pro-Navy bias, or is it just common sense? I go with the latter view.